The store will not work correctly in the case when cookies are disabled.

The Magic of Magnets: A Physics Lesson on Lenz's Law 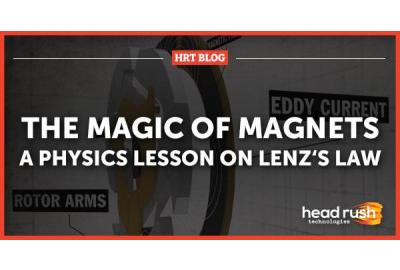 The Magic of Magnets: A Physics Lesson on Lenz's Law

We're back with another physics lessons, and this time we're exploring the magic and mystery of magnets. Magnets are used in speakers, TV screens, medical equipment, and to hold our prized work on the refrigerator door. But just because we interact with magnets on a daily basis doesn't mean we understand the invisible forces behind them. It's fun physics that sometimes seems like pure magic!

This magnetic magic is part of what makes our TRUBLUE Auto Belay so popular. The magnetic braking technology is extremely reliable with no contacting parts to wear or fail and provides a smooth, enjoyable experience for participants. We're going to give you a sneak peek into how our magnetic braking works during this physics lesson, but we swear we won't lecture you.

Faraday's Law is the basic law of electromagnetism that describes how a magnet and an electric circuit interact and was discovered by Michael Faraday in 1831. Faraday found that a current was created by the movement of a magnet near non-magnetic metal. In one experiment, he rotated a copper disk near a bar magnet which then created a steady electrical current. The faster the disk rotated, the stronger the current that was created.

To take Faraday's Law one step further, 19th century physicist Heinrich Lenz observed electrical currents generated by changing magnetic fields and saw that the induced magnetic fields opposed the original magnetic field. This filled in a previous gap in the knowledge about the relationship between electricity and magnetism, and the new finding was named Lenz's Law.

Lenz's Law is the key to understanding the eddy current magnetic braking technology used in all of our devices. There are strong magnets in all of our devices. When aluminum arms rotate past these magnets it creates magnetic eddy currents (named for the way they flow in circles like eddies in a river) that oppose the initial magnetic field. This is Lenz's Law in action, and the opposition of these two forces is what creates the braking force. The faster the movement of the aluminum arms rotating, the stronger the braking force will be.

If the eddy currents flowed in the same direction as the magnetic field that produced them, this magnetic field would be reinforced and increase in strength exponentially. In other words, "free" energy would be created. This would defy the law of conservation of energy, which states that energy cannot be created or destroyed. Energy can only change from one form to another or be transferred from one object to another.

TRUBLUE auto belays all rely on the magic! I mean the physics of these electromagnetic forces. Our patented eddy current magnetic braking technology relies on Lenz's Law to provide reliable braking all without contacting parts to keep participants safe and having fun. It's fun to know some of the science involved, but lucky for you, it's not necessary to know any of the physics behind our devices to enjoy them. 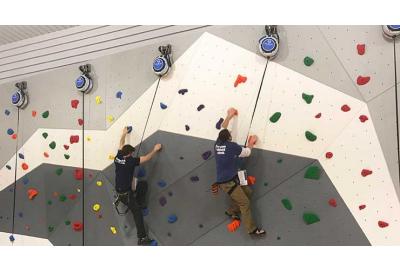 How Do Auto Belays Work: What's Going on in There? 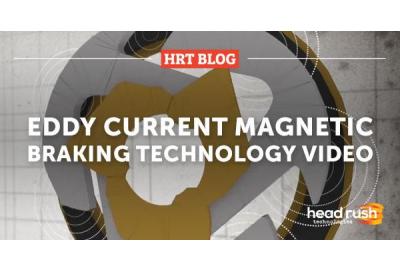 How Does an Eddy Current Brake Work? TRUTUBE Video Demonstration

Product Comparison: What’s New About the TRUBLUE iQ Series
Technology to Improve the Accessibility of Your Facility
Watch Chris Sharma Climb the Crux on TRUBLUE iQ+
5 Features Every Modern Climbing Gym Should Have
The Role of Auto Belays in Self-Care
8 Auto Belay Safety Measures
Overcome Negative Impacts of COVID with TRUBLUEs
A Sit Down with Emma Hunt, TRUBLUE's Latest Sponsored Athlete
Catch-and-Hold: What is it and how does it work?
Campus Rec Centers Can Bring New Training Opportunities to Collegiate Climbers with Auto Belays
Copyright © 2021 Head Rush Technologies